Your health is our main priority

Access to the villa and tea-room requires the presentation of a vaccination pass which can take different forms (digital or paper format):
- Vaccination certification (complete vaccination schedule, booster dose included within the time limit for eligible persons aged 18 years and 1 month or more) OR
- until 15 February, a negative test less than 24 hours old for people who have received their first dose and are waiting for their second dose OR
- certificate of recovery from COVID-19 more than 11 days and less than six months old OR
- certificate of contraindication to vaccination.

We thank you for your understanding,
The Villa Ephrussi de Rothschild Team 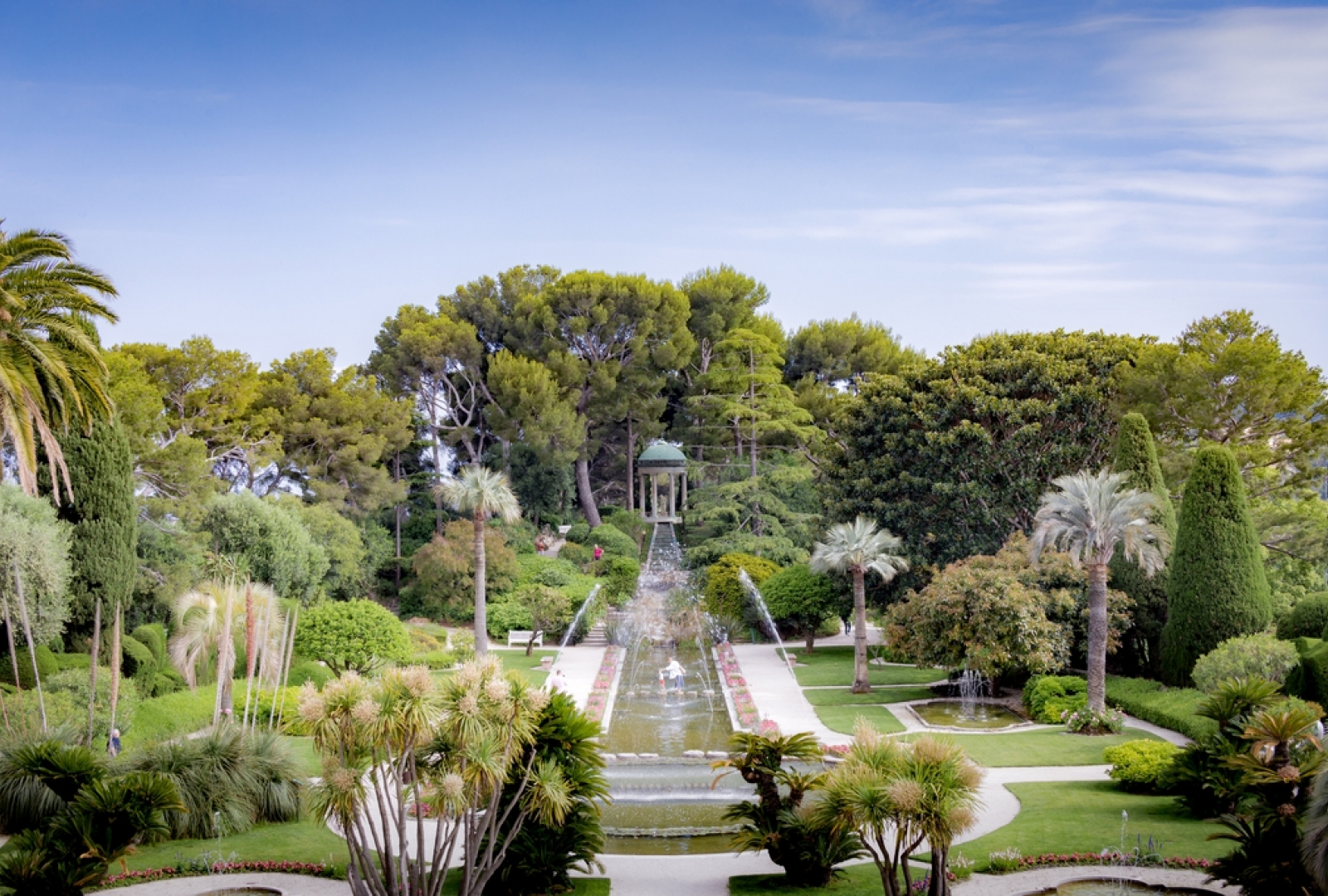 Béatrice designed this main garden in the shape of ship’s deck, decorated with waterfalls and ponds, with the Temple of Love at the bow. And, as she could see the sea on either side, she could imagine being on board the steamship “Ile de France”, which is the name she gave to the Villa in memory of an unforgettable voyage. From the loggia, Admiral Béatrice could survey her team of thirty gardeners, all wearing berets with a red pompom!

Trees such as hundred-year-old olive trees, cypress hedges and Aleppo pines have been given pride of place in the garden. During the night, cleverly arranged lamps lit up their foliage and also the large pond. This meant that Béatrice could also admire the spectacle from a distance as she returned from her baccarat parties or from the casino at Monte Carlo.
This garden comprises a high flowerbed in front of the Villa, lawns decorated with flame-topped urns and large Italian Renaissance urns called “cardinal vases”, a large oval flowerbed with a channel and ornamental ponds, and an exotic touch provided by palm trees and the scent of agaves.

To add to the fairytale feel, musical fountains spring from the large pond like a grand aquatic ballet. 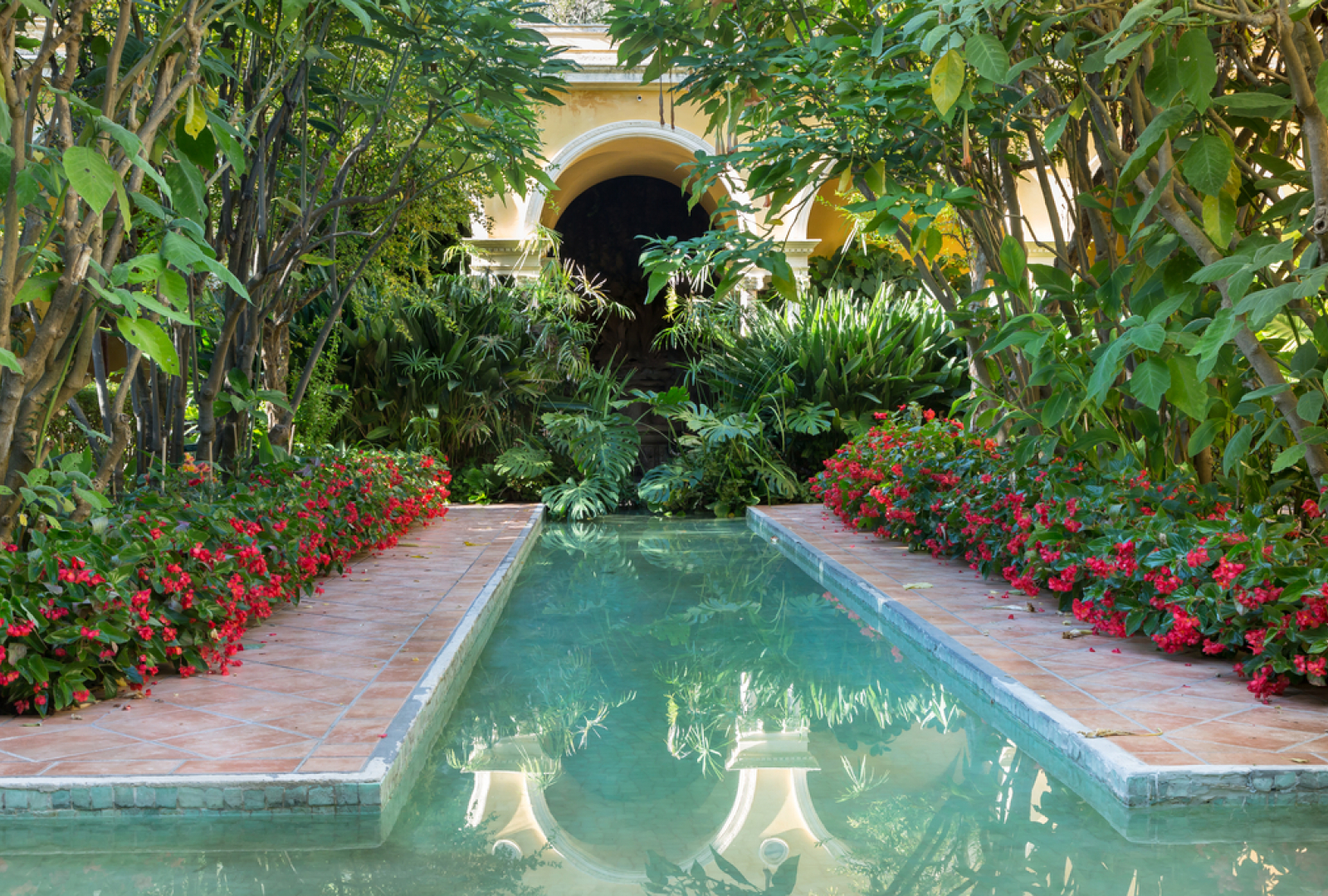 The Spanish garden takes the form of a covered patio, crossed by a narrow channel filled with plants and surrounded on the three other sides by fine Corinthian arcades. The ochre walls and the arches create an oriental ambience. In the summer, datura, arum lilies and honeysuckle give forth their heady perfumes. The Mediterranean pomegranate trees give way to strelitzia reginae, otherwise known as bird of paradise, with their strange spiked blue and orange petals that resemble the heads of tropical birds. Around the ponds grows papyrus from Egypt and the huge perforated leaves of Monstera deliciosa, commonly called the “Swiss-cheese plant”. 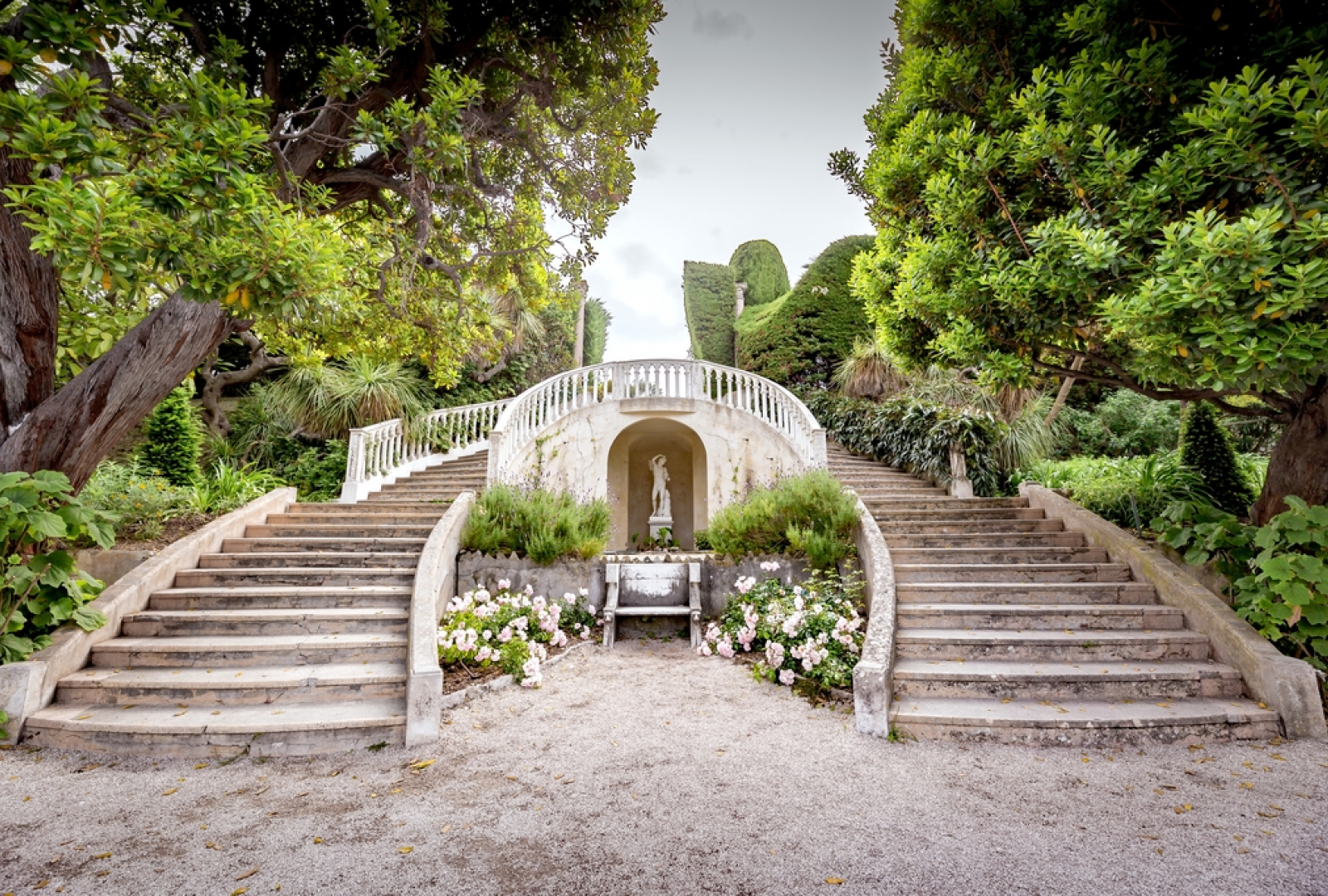 The Florentine garden is the only remnant of the huge Italian garden that Béatrice had planted. A large horseshoe staircase contains a neoclassical marble angel in its niche. Philodendrons and water hyacinths grow in this garden. 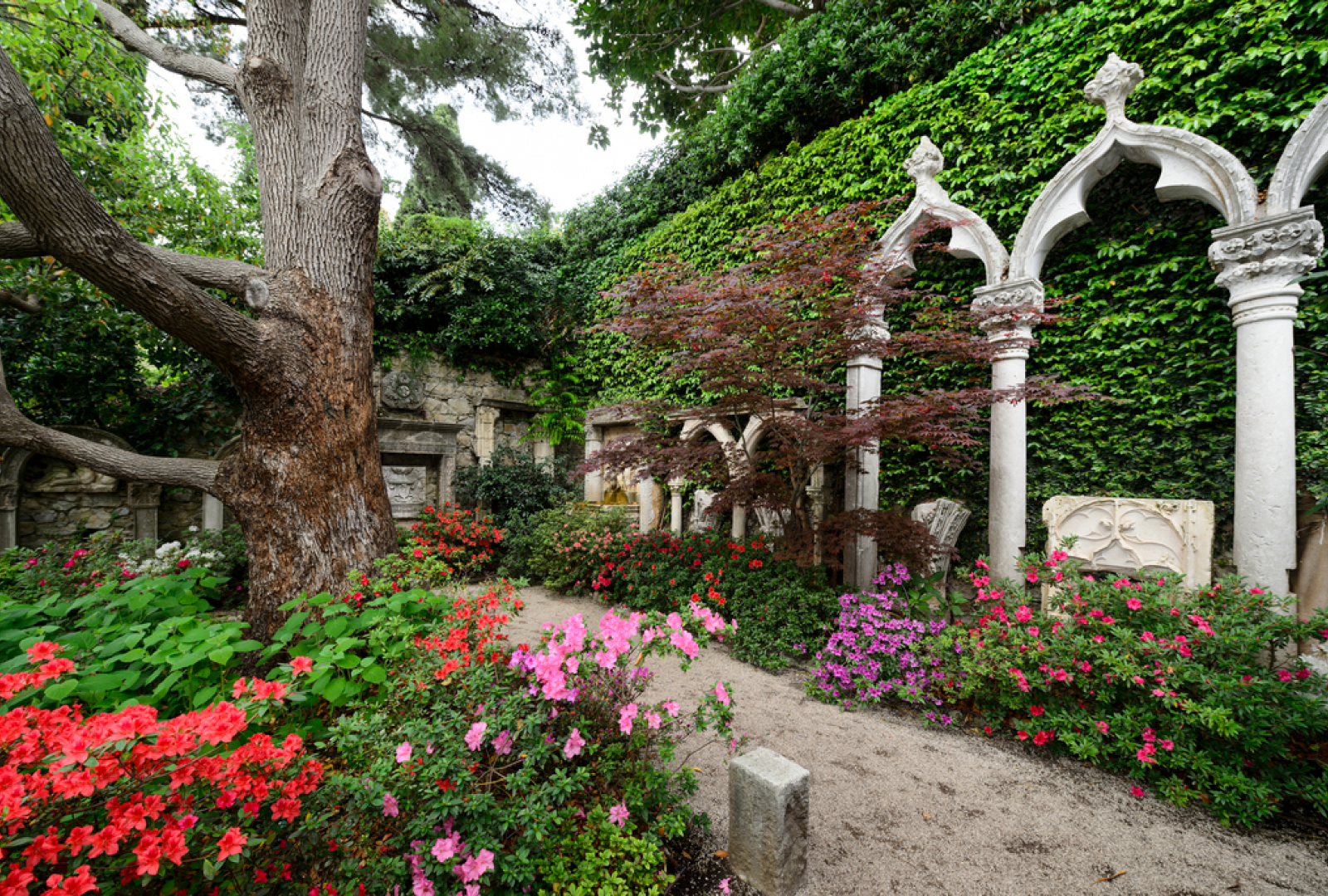 A shady enclosure in the shape of a quadrilateral, the stone garden features bas-reliefs and gargoyles originally from civil or religious buildings, shaded by a camphor laurel and a California bay tree. It is an unusual sight that unfolds before your eyes here, an exquisite combination of works of art from diverse origins and eras. It is a disparate collection of works of art that did not find a place inside the Villa: arches, fountains, canopies, bas-reliefs from the Middle Ages and the Renaissance, monstrous gargoyles, stone grotesques, carnivalesque gnomes from Provence. A rampant dwarf fig tree winds around the columns and there is an ambience of the undergrowth here. The best time to visit this garden is from February to April to see the azaleas, Japanese camellias, rhododendrons, fuchsias and the unusual solandras. 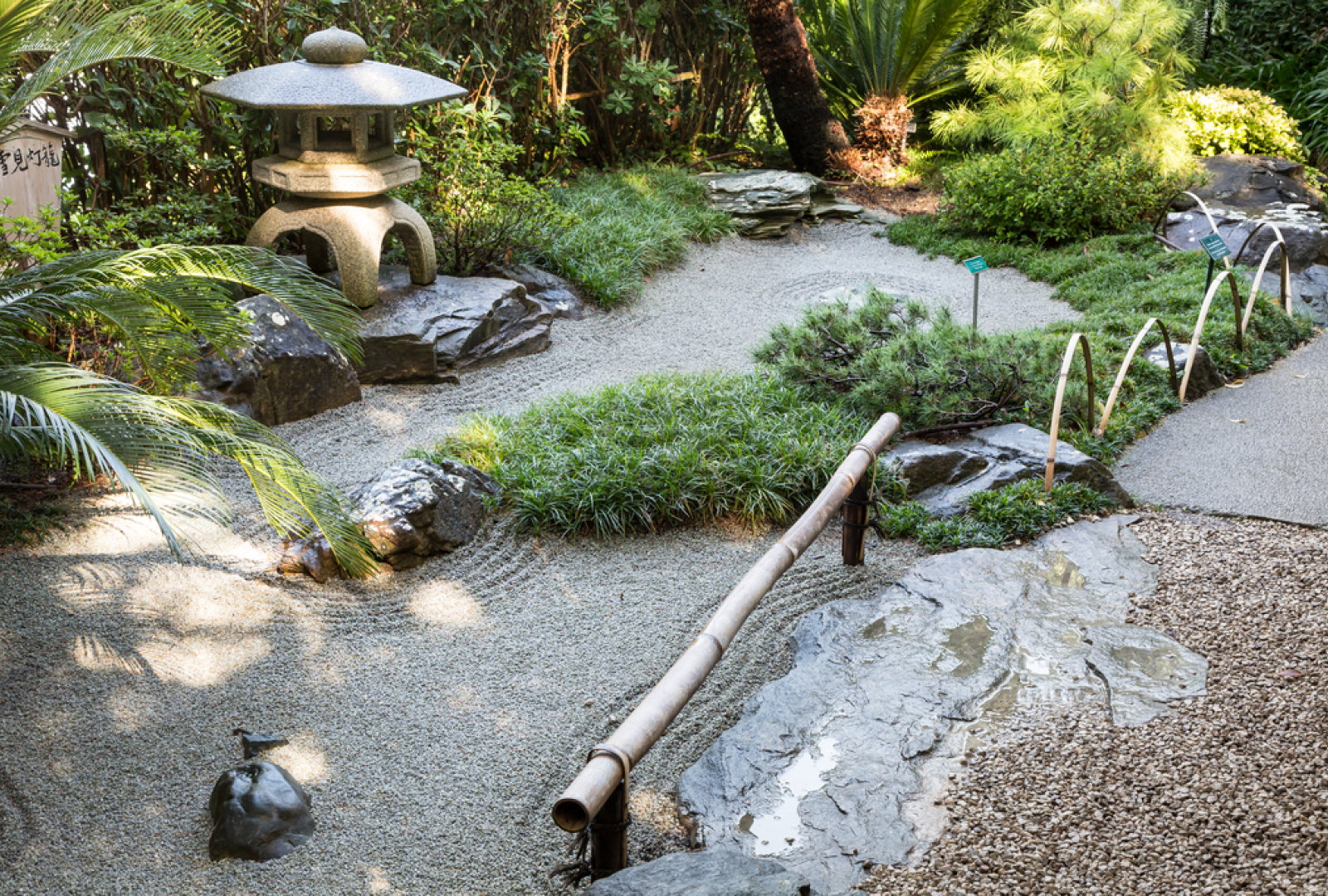 The Japanese garden is known as “Cho-Seki-Tei”, which means “garden where one can calmly listen to the pleasant sound of the waves at twilight”. In this “zen world”, water is everywhere. The garden also features soothing motifs traced in the white sand. Designed and created by Professor Shigeo Fukuhara, this garden features the traditional wooden pavilion, bridge, lanterns and basins which echo over a thousand years of Japanese tradition. A pond with a pebble shore contains beautiful koi carp, which are highly revered in the land of the rising sun.
The garden was fully restored in spring 2016, thanks to the intervention of a sponsor, Nippon TV. 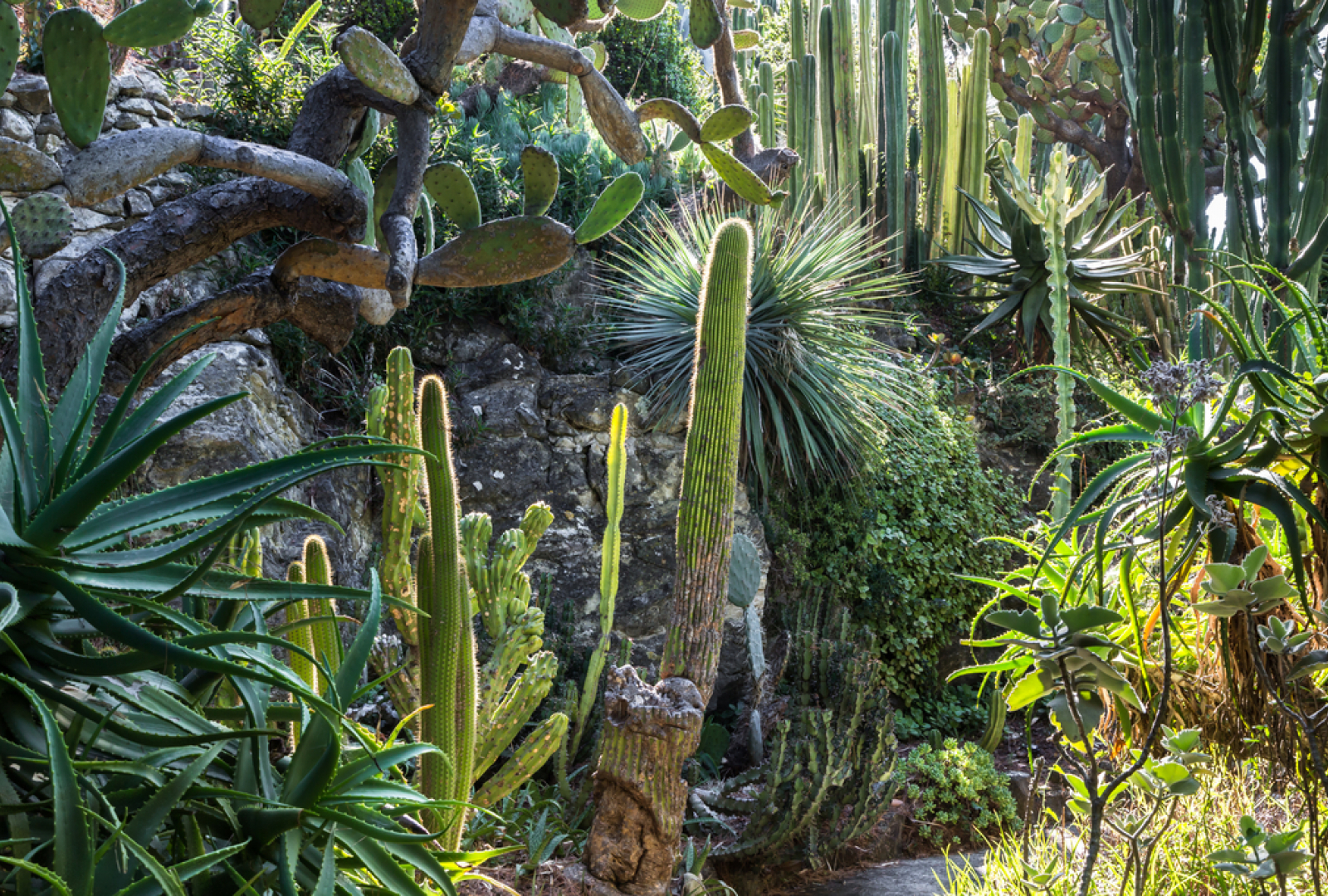 Formerly called the Mexican garden, the exotic garden was nearly destroyed during the heavy frosts of 1985. It is the kingdom of succulents and gigantic cacti. The various species of agave, with smooth or prickly leaves, have achieved an impressive size over the years, and so too have the barbary figs that collapse under the weight of their flowers in the spring and the echinocatus with their spiny barrels known as “mother-in-law’s cushions”. The clusters of orange flowers on the aloes accentuate the flamboyant character of this garden, a sharp contrast to the subdued atmosphere of the neighbouring rose garden. Its steep and winding paths truly transport you to a different world. 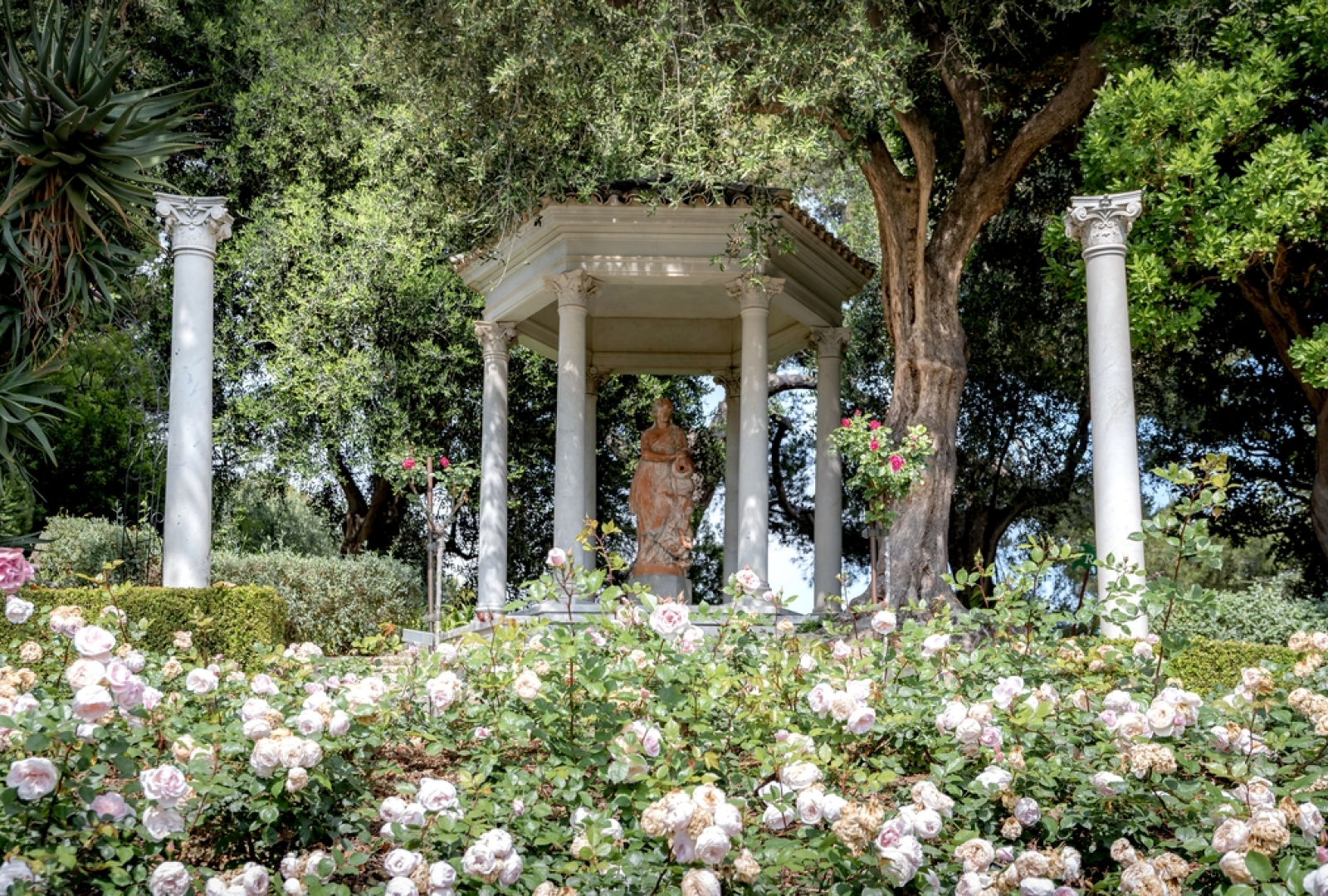 Adorning the tip of the rocky outcrop, the rose garden is an enchantment for the senses. Numerous varieties fill the air with their fragrance at this far end of the garden, a special corner with a niche in openwork marble and a small hexagonal temple containing a graceful deity at its centre. There are a hundred varieties of rose growing here, one of which bears the name of the Baroness. The best time of year to visit this part of the garden is May to July, when the flowers are in full bloom and at their most fragrant. 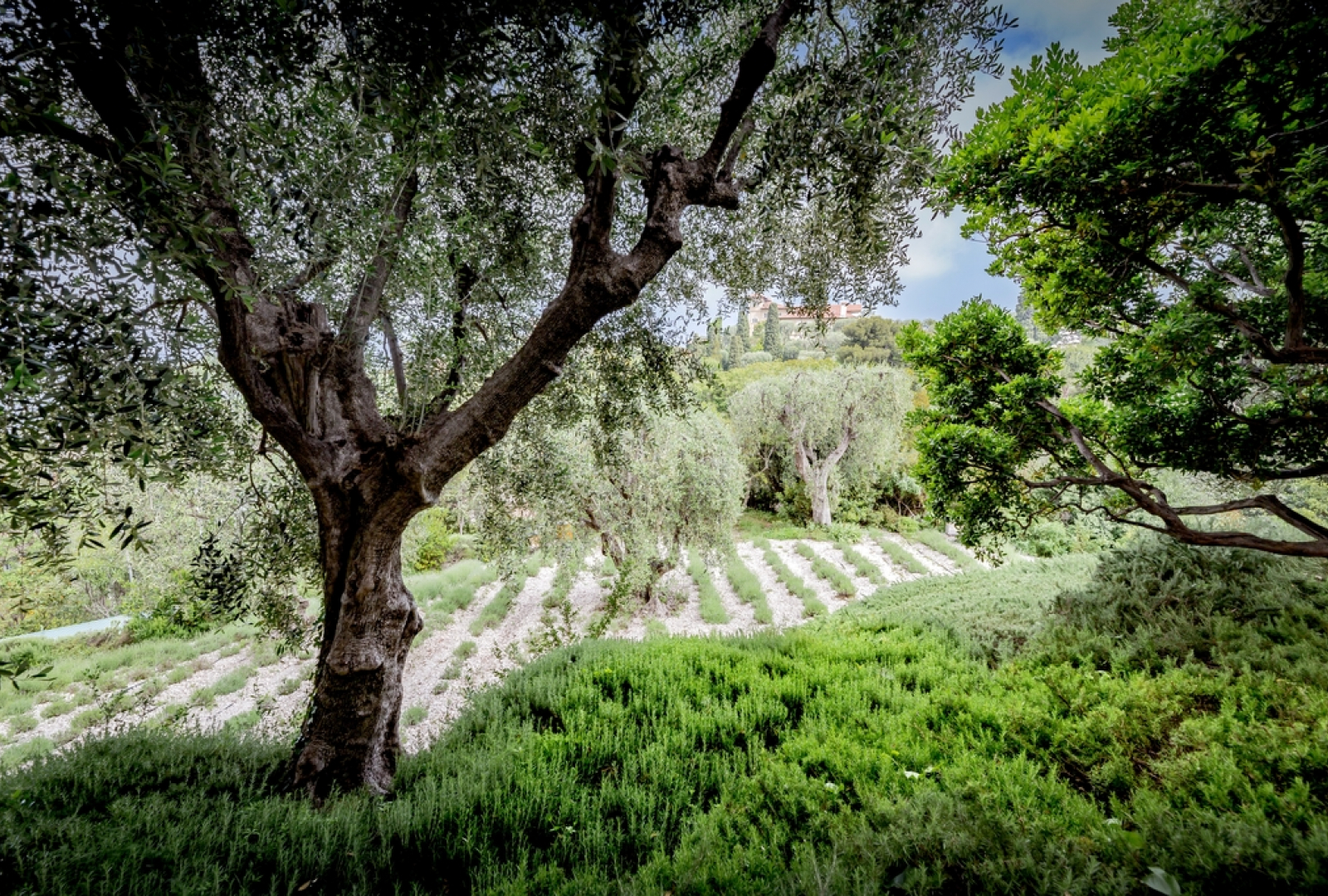 The various paths of the Provençal garden are bordered with olive and pine trees bent by the wind, lavender and agapanthus.